Ingenuity, the first helicopter to fly on Mars, is based on a Linux system. Its software framework is available in open source and devs can integrate it into their projects


In a few hours (8 p.m. KST, 2 p.m. EST), during an online event to be launched at 8 p.m. Paris time (2 p.m. EST), NASA will present new photos (including a video) of the descent of its Perseverance rover on the Martian surface. Cameras were installed both on the rover and on its descent stage, to film the landing stages. These are most likely images that the US space agency is about to show to the world on the evening of February 22, 2021.

After the successful landing of the Perseverance rover on Martian soil on February 18, following the 7 minutes of terror (an expression from Jet Propulsion Laboratory to describe this landing phase of the mission which evokes all the difficulty of landing a machine so imposing on the red plant), the helicopter Ingenuity, who is sheltered under the hood of Perseverance, gave signs of life. Although Ingenuity is a small helicopter weighing just under 2kg, this technical achievement is ambitious. Indeed, Ingenuity aims to achieve the first overview of the red plant. His mission will last 30 Martian days (a Martian day is 24 hours and 37 minutes on Earth). He will have to carry out during this one a total of 5 flights in order to collect teletrical data. Ingenuity is the first aircraft ever to take off and fly in an atmosphere other than the terrestrial atmosphere.

Ingenuity was designed to survive freezing temperatures, handle ruthless power constraints, and attempt a series of 90-second flights while being separated from the 10-minute-light Earth. Which means that real-time communication or control is impossible. To understand how NASA does this, Tim Canham, head of helicopter operations on Mars at NASA’s Jet Propulsion Laboratory (JPL), gave an interview to the US press.

It is important to keep the helicopter’s mission to Mars in context, as this is a technological demonstration. The main objective here is to fly to Mars and that’s it. The importance and value of the mission is to show that flight to Mars is possible, and to collect data that will be used in the design of the next generation of Martian rotorcraft to achieve more ambitious and exciting things.

Here is an animation from JPL showing the most complex mission that is currently planned:

Tim Canham explained: This is the first time we will be piloting Linux on Mars. We are currently running on a Linux operating system. The software framework we use is the one we developed at JPL for cubesats and instruments, and we made it open source a few years ago. So you can get the software framework deployed on the helicopter that flies to Mars and use it on your own project. This is kind of an open source victory because we are piloting an open source operating system and open source theft software framework and flying trade parts that you can buy off the shelf if you wanted to do it yourself. One day. This is new to JPL, because they tend to like what is very safe and proven, but a lot of people are very enthusiastic about it and we are really looking forward to it.

When asked in which direction does the helicopter operate autonomously, he replied:

This means that the flights are planned very precisely. It is not real autonomy, in the sense that we do not give it goals and rules and we do not do any high level reasoning. It is a kind of halfway autonomy. The brute force method would be a human sitting there and flying him with joysticks, and obviously we can’t do that on Mars. But the project did not have time to develop a really detailed autonomy on the helicopter, so we give it the flight plan in advance, and it executes a trajectory that has been preplanned. While flying, it autonomously tries to ensure that it stays on that path in the presence of gusts of wind or other things that may occur in this environment. But it’s really designed to follow a path that we plan in the field before we fly.

It is not necessarily a proof of concept of advanced autonomy to initiate a query as taking a picture of this rock would be more advanced autonomy, in my opinion. While this is truly a scanned flight, the main goal is to prove that we can successfully fly on Mars. We are currently working on future mission concepts which would involve a larger helicopter with much more autonomy on board and which could possibly [atteindre] this type of autonomy is advancing. But if you remember Mars Pathfinder, the very first rover to run on Mars, it had a very basic mission: to drive in a circle around the base station and try to take pictures and rock samples. So, as a tech demo, we’re trying to be modest about what we’re trying to do with the helicopter the first time around. 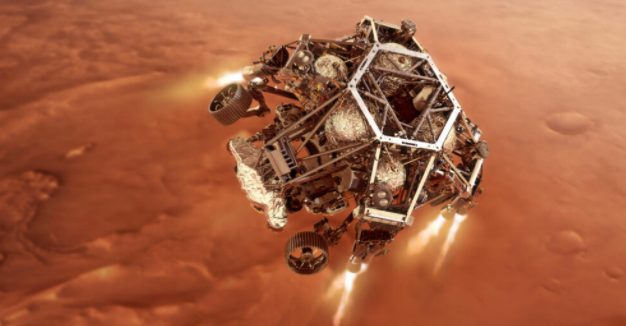 Ingenuity was powered up for the first time on Saturday, February 20. Its six lithium-ion batteries will be charged to about 30% of their capacity. The Jet Propulsion Laboratory (JPL) team in charge of the March 2020 mission has planned to load them to 35% of their capacity within a few days. Then, weekly recharging sessions will be scheduled to keep the helicopter warm on the cold surface of Mars in order to prepare it for its first flight. Moreover, Ingenuity is taking care of it for the moment thanks to the Perseverance rover. However, it will take care of itself with its solar panels once it is deployed.