Covid: How has the suicide rate among women in Japan increased?

Japan reports suicides faster and more accurately than anywhere else in the world. Unlike most countries, they are compiled here at the end of each month. During the Covid pandemic, the numbers revealed a troubling story.

In 2020, for the first time in 11 years, the suicide rate increased in Japan. Even more surprisingly, while male suicides declined slightly, rates among women jumped almost 15%.

In just one month, in October, the female suicide rate in Japan jumped more than 70% from the same month the previous year.

What is going on ? And why does the Covid pandemic seem to hit women so much harder than men?

Not to be missed on BBC Africa:

Disclaimer: Some may find the content of this story upsetting.

Meeting face-to-face with a young woman who has repeatedly attempted suicide is a disturbing experience. It gave me new respect for those working on suicide prevention.

Across the table is a 19-year-old woman with blunt hair. She sits without moving.

Quietly, without any emotion, she begins to tell me her story. She says it started when she was 15. Her older brother started to abuse her violently.

She eventually ran away from home, but that didn’t end the pain and loneliness.

Ending his life seemed to be the only solution.

“Since last year, around the same time, I’ve been going back and forth to the hospital a lot,” she tells me. “I tried to kill myself several times, but I didn’t succeed, so now I guess I’ve given up on dying.”

What stopped her was the intervention of the Bond project. They found her a safe place to live and began to give her intensive counseling.

Jun Tachibana is the founder of the Bond Project. She is a woman in her forties with relentless optimism.

“When girls are really in trouble and in pain, they really don’t know what to do,” she says. “We are here, ready to listen to them, to tell them – we are here with you.”

According to Ms Tachibana, the Covid appears to be pushing those who are already vulnerable closer to the edge. She describes some of the distressing calls her staff have received in recent months.

We hear a lot of “I want to die” and “I have nowhere to go,” she says. They say: “It is so painful, I am so lonely that I want to disappear”.

For those who suffer from physical or sexual abuse, the Covid has made the situation much worse.

“A girl I spoke to the other day told me that she was sexually harassed by her father,” Ms. Tachibana tells me. “But because of Covid, her father doesn’t work a lot and is often at home, so there is no escaping him.”

If you look at previous periods of crisis in Japan, like the banking crisis of 2008 or the collapse of the Japanese stock market and the housing bubble in the early 1990s, the impact was felt largely by middle-aged men. . The suicide rate among men has risen sharply.

But Covid is different, it affects young people and, in particular, young women. The reasons are complex. 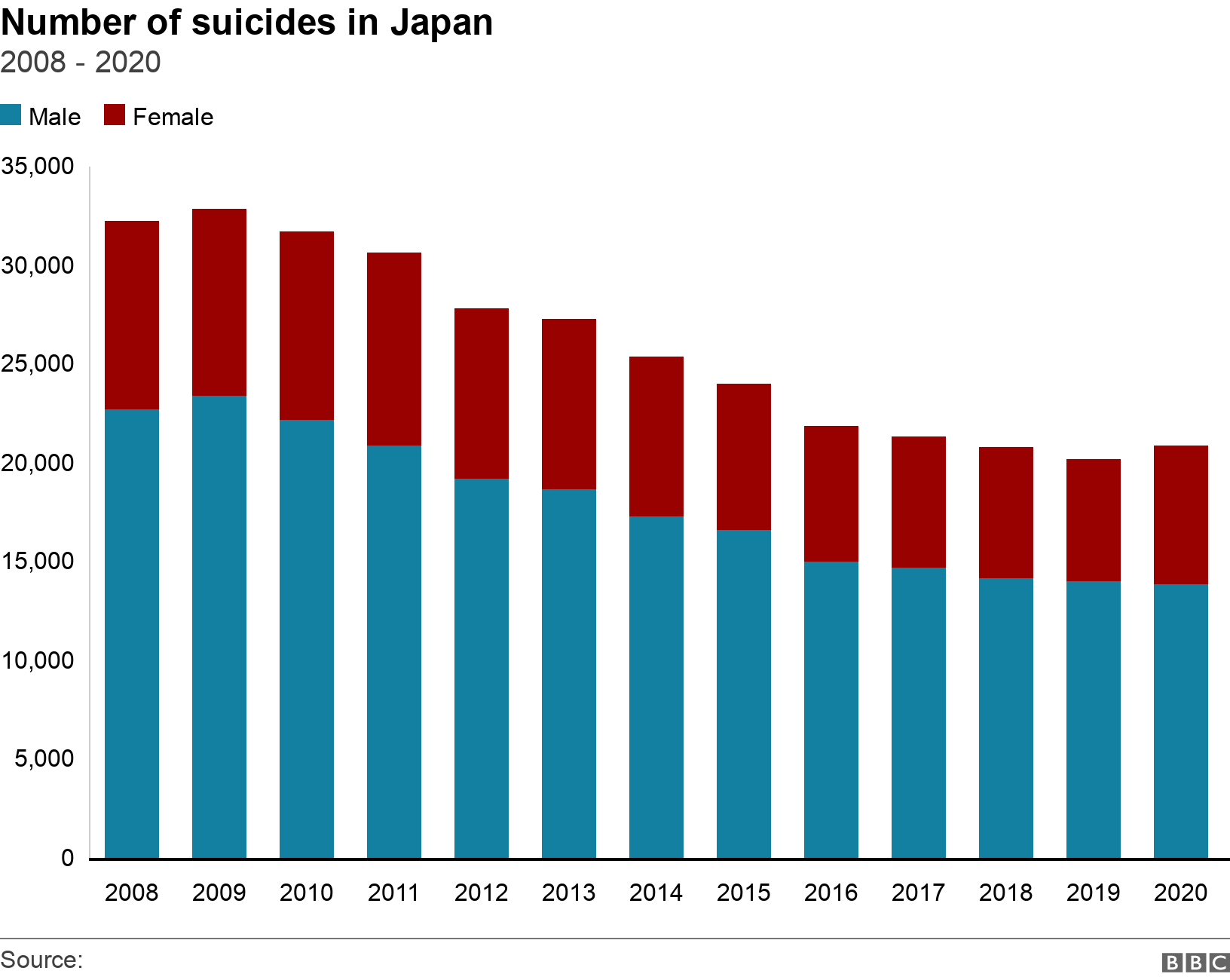 Japan once had the highest suicide rate in the developed world. Over the past decade, he has managed to reduce the suicide rate by about a third.

Professor Michiko Ueda is one of Japan’s leading experts on suicide. She tells me how shocking it has been to witness a sharp turnaround in recent months.

“This pattern of female suicides is very, very unusual,” she tells me.

“I have never seen such an increase in my career as a researcher on this subject. The problem with the coronavirus pandemic is that the industries most affected are industries employing women, such as tourism and retail. retail and food industries “.

Japan has seen a sharp increase in the number of single women living alone, with many choosing this solution over marriage, which still involves fairly traditional male and female roles. Young women are also much more likely to work in so-called precarious jobs, Professor Ueda said.

“A lot of women are no longer married,” she says. “They have to support themselves and don’t have permanent jobs. So when something happens, of course, they are very, very hard hit. The number of job losses among non-permanent staff is so, so important in the past eight months, ”she explains.

One month really stands out. In October of last year, 879 women committed suicide. This is more than 70% more than the same month in 2019.

Something particularly strange was happening.

On September 27 of last year, a very famous and popular actress named Yuko Takeuchi was found dead in her home. It was later reported that she had committed suicide.

Yasuyuki Shimizu is a former journalist who now runs a non-profit organization (NPO) dedicated to tackling the suicide problem in Japan.

“From the day the news of a celebrity suicide is reported, the number of suicides increases and stays that way for about 10 days,” he says.

“From the data, we can see that the actress’ suicide on September 27 led to 207 more female suicides in the next 10 days.”

If you look at the data on the suicides of women roughly the same age as Yuko Takeuchi, the statistics are even grimmer.

“Women in their 40s are the most influenced of all age groups,” says Shimizu. “For this group, the suicide rate has more than doubled.”

Other experts agree that there is a very strong link between celebrity suicides and an immediate rise in suicides in the days that follow.

This phenomenon is not unique to Japan, and it is one of the reasons why it is so difficult to report on suicide. In the aftermath of a celebrity suicide, the more discussed it is in the media and on social media, the greater the impact on other vulnerable people.

And just as Covid leaves loved ones unable to mourn those who have succumbed to the virus, it makes the lives of families of suicide victims much more difficult.

“When I talk to family members, their feeling of not being able to save the loved one is very strong, which often leads them to blame themselves.” Mai Suganuma tells me. “Me too, I blamed myself for not having been able to save my father”.

“Now they are told they have to stay home. I’m afraid the guilt will intensify. The Japanese don’t talk about death to begin with. We don’t have a culture to talk about suicides. ”

Japan is now in a so-called third wave of Covid infections, and the government has ordered a second state of emergency. It is likely that it will be extended until the end of February. More and more restaurants, hotels and bars are closing their doors. More and more people are losing their jobs.

For Professor Ueda, there is another nagging question. If this happens in Japan, without strict containment, and with relatively few deaths from Covid, then what happens in other countries where the pandemic is much worse?